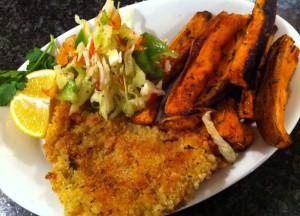 ‘Fish Fridays’ or ‘meatless Fridays’ is a season during Lent in which Catholics are obstained from meat.  Growing up Catholic, it was fried flounder most Fridays, which brings me to my cooking segment on NBC / WCNC-TV’s Charlotte Today. Our local Catholic church hosts a ‘Friday Fish Fry’ each Friday during the season of Lent.  I […]

I met Cynthia and was immediately taken in by her charm and passion for cooking. She presented me … END_OF_DOCUMENT_TOKEN_TO_BE_REPLACED