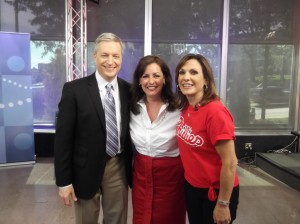 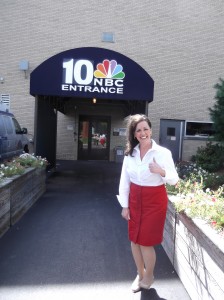 On the menu:  Chicken with Wine and Olives and Eggplant Pizza.  Each recipe was demonstrated from the NEW Revised Edition of “MaMa Mia Cucina ~ A Flavor of Good Food and Good Family”, which officially launches on Thursday, October 20 at NOON at Bloomingdale’s in King of Prussia, Pennsylvania.

Honoring our ‘hometown’ of brotherly love, Cliff Lee, pitcher for the Philadelphia Phillies, also interviewed with Bill and Lu Ann.

For the many requests for the recipes, thank you for asking, and here you go…:

Chicken with Wine and Olives

Place chicken in a large 9-1/2 x 13-inch baking pan and pour marinade over chicken.  Cover and bake at 350 degrees for 45 – 60 minutes.  Uncover and pour olives over chicken.  Add wine and cook the chicken for an additional 60 minutes.  Cook uncovered.  Turn chicken as it cooks so that it doesn’t get too brown and dried out.  After the chicken is nicely brown and cooked, cover again to moisten until ready to serve.

When we had chicken for dinner, it was chicken with wine.  We served this dish with pasta, soup, vegetables, and so on . . . for all of those big family dinners. 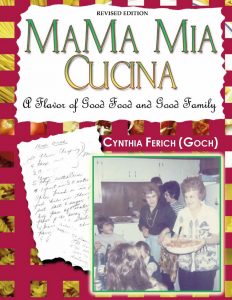 Wash and slice eggplant into 1/2-inch slices.  “Sweat” the eggplant by salting, letting it stand for 20 to 30 minutes, and rinsing well of all salt.

In a large baking pan, cover with 2-3 tablespoons olive oil and in a single layer, place eggplant slices on the pan.  Combine sauce with garlic, and spread the sauce evenly over each slice and sprinkle with cheese, oregano and pepper on each slice as if you were making a pizza.  Drizzle the remaining olive oil on top of each slice of eggplant not to dry it out.

Bake at 350 degrees for approximately 45 minutes, or until brown on the outside and soft and tender on the inside.

For the eggplant lovers! 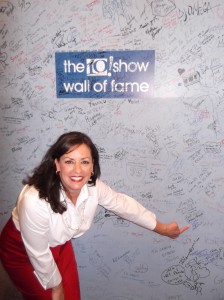 After writing and self-publishing “MaMa Mia Cucina” in 2007, Cynthia's writing, cooking and culinary teachings evolved into being as an entity surrounding food, fun, family and friends.

In an effort to capture her family’s ‘old world’ Italian recipes for future generations to enjoy, her grandmother, ‘Noni’, and Cynthia joined forces. "She measured, I wrote, and we cooked."

During her grandmother's latter 80 years, she traveled in memory through her life, as they shared in stories of a lifetime and long ago. As they shared this final chapter in her life, what Cynthia soon discovered through all of the measuring, cooking, sharing in the love of a family, and in the love of a friendship, was the passion for cooking, and a love that nourishes us all… It’s all about the FOOD!

I met Cynthia and was immediately taken in by her charm and passion for cooking. She presented me … END_OF_DOCUMENT_TOKEN_TO_BE_REPLACED